Fr James McGrath was born in Kilkenny in July 1934 and was ordained at Kilkenny Cathedral on 31st May 1959. His first appointment in the Shrewsbury Diocese was with us at Our Lady and St Christopher’s, but was only with us for a few months. In October 1959 he moved to St Joseph’s in Sale where he stayed until 1967. He then spent 4 years at Our Lady’s in Stockport before appointments in Timperley, Dukinfield and in Kenya. Returning to the diocese in 1982 he was appointed to Benchill, and then St Bernard’s in Ellesmere Port, St Joseph’s in Winsford and finally Holy Name in Birkenhead.

Fr Paschal Byrne was born in Dublin in March 1936 and was another priest ordained at Kilkenny Cathedral. His ordination date was 5th June 1960. Fr Paschal’s first appointment was also with us in Romiley and stayed with us for 7 years before moving to St Alban’s in Macclesfield. Further appointments were at St Clare’s in Chester, St Luke’s in Frodsham, and at Christ The King in Bromborough. He is still serving the diocese at St Luke’s in Bebington.

Fr Chris was born on 31st July 1930 in Wallasey to Vera and Joseph, their third child and a brother to John and Anne. He was baptised at the old church of Ss Peter and Paul on 4th August 1930, received his First Holy Communion on 17th July 1938 and was confirmed there in October.His early school years were spent at Maris Stella Primary School in New Brighton and at the Christian Brothers’ St Anselm’s College in Birkenhead. He then entered Ushaw Junior Seminary in 1943 where he remained until 1949 to continue his studies for the priesthood at the Venerable English College in Rome.

He was ordained priest at Our Lady of the Snows Chapel, Palazzola near Rome on 10th July, 1955 by Archbishop William Godfrey. He finished his studies in Theology and Canon Law in 1958, and returned to the Diocese of Shrewsbury to start his priestly ministry at the Cathedral under Canon Terence Walsh. His next posting was as Assistant Priest to Fr Michael Elcock at Our Lady and St Christopher, Romiley.

He returned to Wirral in 1970 as Parish Priest at Our Lady of Pity in Greasby during the exciting years after the Second Vatican Council and in 1980 celebrated his Silver Anniversary. In 1982 Bishop Joseph Gray appointed him as Vicar General of the Diocese, and as Parish Priest to St Teresa’s, Wilmslow, with a roving commission in the pastoral care of the clergy until the year 2000.

His final posting as Parish Priest was at the historic parish of St Mary of the Angels in Hooton where he stayed until his retirement in 2003. In July 2005, Fr Chris celebrated his Golden Jubilee of priesthood.

Fr Frederick Walsh was born on 7th March 1936 and was ordained at St Werburgh’s in Birkenhead on 29th June 1962. His first appointment was at Benchill before spending 4 years with us at Our Lady & St Christopher’s from 1969 to 1973. After leaving Romiley he spent a year at St Saviour’s in Ellesmere Port before appointments in West Timperley, Partington and Greasby. He left active ministry in 1983.

Fr Sean Healey was ordained in June 1970. Another priest whose first parish was ours, he spent a year here, before moving to St Laurence in Birkenhead (1971-72) and then to Seacombe until 1975 when he left the priesthood.

Fr Patrick Egan was born 31st March 1926 and was ordained on 4th March 1950, but was not a priest in the Shrewsbury Diocese until being appointed at the Cathedral in 1968. Further appointments as Assistant Priest were at St Laurence, Birkenhead (1969-71), Blacon (1971-73) and with us in Romiley (1973-75) . His first Parish Prest appointment was at St Bernard’s in Ellesmere Port where he resigned through ill health in 1981. He then spent time residing in Brinnington for a year and moved to Monkmoor from 1982 to 1993. He then retired to St Werburgh’s in Birkenhead in September 1993 and died on 24th April 2003.

Fr Donal Dwyer was born on 19th April 1950. He trained for the priesthood at Thurles, and was ordained at St Patrick’s, Thurles on 7th June 1975.His first appointment in the Shrewsbury diocese was with us at Our Lady and St Christopher’s, and moved onto St Alban’s in Liscard from 1980-1985. He then became chaplain at Arrowe Park Hospital in 1985. His first Parish Priest appointment was in 1988 at St Mary’s in Shifnal and then at St Peter’s, Stalybridge from 1993 to 2002. At that point he returned to Ireland in the Diocese of Killaloe where he is continuing his ministry at the parishes of St Joseph, Castleconnell & St Patrick’s, Ahane.

Fr Anthony Cavanagh was born in Manchester on 14th June 1949. He was ordained at St Anthony’s, Woodhouse Park in 1980. Another priest whose first appointment in the diocese was with us at Our Lady & St Christopher’s. He remained with us for 5 years before moving to Our Lady’s in Birkenhead for 3 years. A year was then spent in Great Sutton before a Parish Priest appointment at St Mary’s in Madeley. He then moved to St Luke’s in Bebington for a year and St Paul’s in Birkenhead from 1993 to 1995 before a final appointment at St Werburgh’s in Chester. He then left the priesthood. 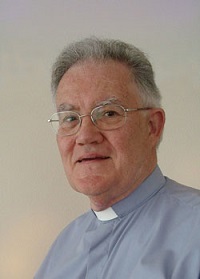 Fr Anthony Myers was born in Workington but the family moved to Manchester after the Second World War. He was educated at St. Aidan’s Primary School, Northern Moor, spent three years at St. Bede’s College, Manchester, and then finished off his secondary education and trained for the priesthood at Ushaw College, Durham.Ordained in 1966, he went to Rome for further studies, and then, after three short pastoral appointments in St. Anthony’s Wythenshawe, St. Peter’s, Stalybridge and St. Vincent’s, Altrincham, returned to Ushaw College to teach Canon Law. He was there from 1972 until 1985, during which time he also acquired the posts of Assistant Bursar and Vice Rector.

Fr Michael Murray was ordained on 25th June 1983. He was appointed as assistant Priest at Our Lady & St Christopher’s in 1986 and stayed for 3 years before moving to St John & St Thomas in Benchill. In 1995 Fr Michael moved to Our Lady & St Joseph’s in Wallasey, and from 2002 to 2016, he was been part of the Wythenshawe Team Ministry at St Anthony’s, Woodhouse Park. Fr Michael retired in 2016 and sadly died in 2019.

Fr Simon O’Connor was a newly ordained Priest when he arrived at Our Lady & St Christopher’s. He was ordained on 23rd July 1989. Following his time in Romiley, he briefly moved to St Anthony’s, Woodhouse Park, Wythenshawe before going onto St Patrick’s in Wellington. Fr Simon then spend some time at Our Lady & The Apostles in Shaw Heath, Stockport and then went onto St Aiden’s, Northern Moor. By 2004, he had been appointed as Parish Priest at Holy Family, Pensby and then moved to St Michael’s in Woodchurch. As at September 2020, Fr Simon is Parish Priest at St Joseph’s in Winsford.

Fr Anthony Leonard (Jr) was ordained on 17th March 1984. He came to Our Lady & St Christopher’s in 1991 after spending some time at the Assumbi Catholic Mission in Kenya. Fr Tony stayed for 3 years before moving to St Peter’s in Wythenshawe. He then moved to St Joseph’s, Birkenhead and Holy Family in Pensby before leaving the Priesthood. 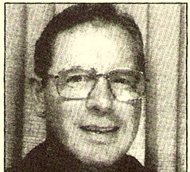 Fr Terence Hillhouse was ordained on 13th July 1991. His first appointment as Assistant Priest was at St Joseph’s in Sale and then he arrived at Our Lady & St Christopher’s at the same time as Fr McLeish in 1994. Sadly, Fr Terry died whilst serving in our Parish in January 1996. A Requiem Mass for a fantastic Priest was held at St Christopher’s to a packed, overflowing congregation.

Fr Peter Hooper was ordained on 4th July 1992 and his first appointment was at St Anthony’s Woodhouse Park in Wythenshawe. In 1996 he moved to Our Lady & St Christopher’s where he stayed for 4 years. He later moved to St Werburgh’s in Chester and St Luke’s in Bebington before leaving the priesthood. 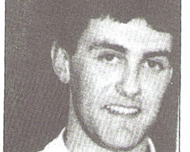 Fr Ray Burke was ordained on 28th September 1991 and his first appointment was Assistant Priest to Fr Michael Murray at St John & St Thomas, Benchill. He later moved to St Saviours, Great Sutton on the Wirral, St Joseph’s in Winsford and St Vincent’s in Altrincham before spending a few years at St Edward’s in Runcorn. He was appointed at our Lady & St Christopher’s in 2002 and stayed until 2004. At that time he took some years away from active ministry before moving to St Werburgh’s in Birkenhead. 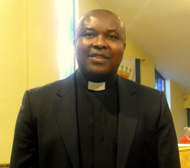 Fr Thaddeus Opara is a priest of Ahiara diocese ordained on the 3rd of August 2002. He served as an assistant priest from August 2002 to September 2005 in the following parishes: St. Jude’s Parish Amuzi, St Thomas Parish Eziudo, St.Gregory’s Parish Ihitteafoukwu and St. Patrick’s Parish Umuokirika. In the month of October 2005 he was appointed the Parish Priest of Our Lady of Victory Amumara, Chaplain of Handmaid Juniorate girls Amumara and Chaplain of Pioneer total abstainers. After two and half years in Our Lady of Victory Parish Amumara, he was appointed to serve as a Cathedral administrator in 2008 and the Director of the school of Evangelization in the diocese. He was serving the diocese in the above functions till the 17th February 2012 when he left for a mission in Shrewsbury diocese, and came to Our Lady & St Christophers. Fr Thaddeus stayed in the Parish until June 2013, when he left to take up a new appointment in Northwich.  He later moved to Wythenshawe and became part of the team ministry.

Fr Edmund Montgomery came to the parish of Our Lady & St Christopher’s in the summer of 2011 as a student to the priesthood. He was to spend some time in the Parish as part of his studies. In December of 2012, Edmund was ordained as a Deacon in Shrewsbury Cathedral, and on 22nd June 2013, on the feast of St John Fisher & St Thomas More, Deacon Edmund was ordained to the priesthood by Bishop Mark Davies. It was announced at the end of his Ordination Mass, that Fr Edmund’s first appointment in the Diocese of Shrewsbury, would be at Our Lady & St Christopher’s.After a total of 4 years within the Parish as Seminarian, Deacon & Priest, Fr Edmund left in February 2015, going to Shrewsbury Cathedral as assistant Priest. 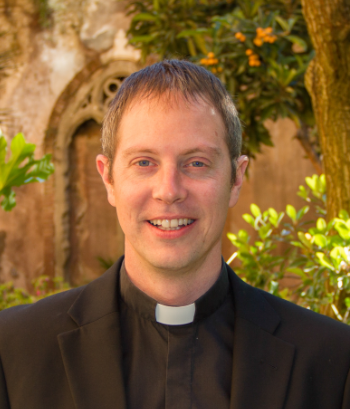 Fr Anthony McGrath was ordained to the Priesthood on 19th July 2014 at his home parish of St Josephs, Sale. Fr Tony completed 7 years of formation at the English college in Rome, and his first appointment in the Shrewsbury Diocese is with us at Our Lady & St Christopher’s. In February 2017 it was announced that Fr Tony would be leaving us to take up an appointment at Shrewsbury Cathedral.  In October 2019 Fr Tony became Parish Priest at Christ Church, Heald Green. 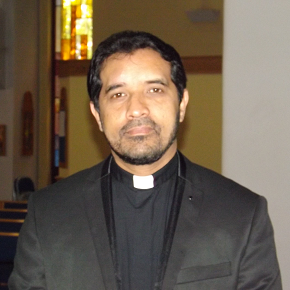 Fr. Kuriakose Madathirampil is a priest of the Syro-Malankara Catholic Church, (Tiruvalla Arch-diocese) in India. He was ordained as a priest on 29th December 2000. He has completed his post graduation in Master of social work. From 2001 to 2016 he served as a priest in various parishes in the Archdiocese of Tiruvalla. As well as now being assistant priest at Our Lady & St Christopher’s, he also serves as the chaplain of Syro-Malankara rite Catholics in Manchester, Liverpool, Sheffield, Coventry and Nottingham.  In September 2020 Fr Kuriakose left to take up an appointment within the Wythenshawe team ministry.