Fr William Griffin was the founder of our Parish. He was ordained at Our Lady’s, Birkenhead on 23rd August 1903. Between 1903 and 1912 he was appointed at St Alban’s in Macclesfield. Not only founder of our parish, and an extremely popular figure, he was also the captain of Romiley Golf Club for 2 years running. After leaving Romiley in 1924, he went on to serve in Moreton, and finally Parish Priest at St Laurence, Birkenhead from 1930 until his death in 1962. He was also made a Canon in 1933.

Fr Edgar Kirby was ordained in 1908, and his first appointment was at St Peters, Stalybridge between 1909 and 1924. He came to Our Lady & St Christopher’s in 1924 and stayed for 4 years before moving to Seacombe, serving there from 1928 to his death in Feb 1954. Another of our former priests who was made a Canon.

Fr Oswald Calderbank was ordained on 29th May 1915 in St Werburghs, Birkenhead. Served at St Joseph’s, Stockport from 1915 to 1916; St Laurence, Birkenhead from 1916 to 1918; and then had appointments in Crewe, Seacombe, Altrincham and Runcorn until arriving at Our Lady & St Christopher’s in 1028. Fr Calderbank served the Parish when our Church was built in 1932. He then became Parish Priest in Whitchurch from 1939 until his death in October 1968.

Fr Christopher Hickey was another priest ordained in St Werburgh’s, Birkenhead on 2nd June 1929. His first appointment was in his home Parish from 1929 to 1935, and apparently, his parents complained that he was coming home too much and felt that he wasn’t working hard enough!! He then spent 3 years at St Joseph’s in Stockport and a year in Whitchurch before coming to Our Lady & St Christopher’s. After leaving Romiley, he spent 13 years as Parish Priest in Latchford, and then 23 in New Ferry before retiring in 1980. He died a year later.

Fr John Quinn was ordained in July 1930 at Our Lady’s, Birkenhead, and had appointments in New Brighton, Hazel Grove, Northwich, Stockport (Our Lady’s) and Shifnal, before coming to Our Lady & St Christopher’s in 1944, staying for 5 years. Later appointments were at Heswall (1949 to 1960) and back to New Brighton (1960 to 1983).

Fr Wilfrid Kelly was ordained in Rome on 1st November 1932. He designed altar and panelling for the War Memorial Chapel at St Bede’s Coll., Manchester. For the same college he designed a marble altar for the main chapel which was intended to replace the high altar. Stuflessers of Ortisei, Italy delivered this just before the outbreak of World War II. It remained in packing cases until the end of the War. Because of some opposition from Old Bedians it did not replace the high altar but one of the side altars. The marble is of a beautiful pink which is rather rare. After leaving Rome in 1935 he became curate at New Ferry until 1939, when Bishop Moriarty gave him permission to reside in a private house in Bebington. This was to enable him to devote himself entirely to the work of the League of God. He had started this to combat atheism by means of leaflets distributed by volunteers.With the outbreak of war he was put him in charge of Hoylake parish where he remained until early 1945. Fr Kelly then served in Lymm before coming to Our Lady & St Christopher’s in 1949. After leaving Romiley he went to Ludlow (1950-54 here he had a horse), Crewe (1954-68) and Knutsford (1968-80). He retired in 1981 and died on 10th April 1989. He was held in very high esteem by his Roman rectors, Hinsley and Godfrey and his own Bishop Moriarty. He had considerable ability as an artist and children would be captivated by his drawings used to illustrate his teaching. He was way ahead of his time, having non-Catholic clergy at Matins in the Catholic church in Ludlow well before Vat II Council. He got on well with fools but not so well with intellectuals.

Fr Thomas Sheerin was ordained on 9th June 1940 at St Josephs in Sale. His first appointment was at St Peter’s in Hazel Grove from 1940 to 1944, followed by appointments at Our Lady’s, Birkenhead and in New Ferry. He became Parish Priest at St Winefride’s in Lymm from 1956 to 1959 before his appointment with us at Our Lady and St Christopher’s in July 1959. He left in 1962/63 when he left active ministry.

Fr Michael Elcock was ordained on 19th July 1936, and his first appointment was at Our Lady’s, Stockport from 1937 to 1943. From there, he served at St Joseph’s, Sale, Bollington and Greasby until a period of sick leave in 1962/1963. He was then appointed Parish Priest at Our Lady & St Christopher’s in 1963, and was responsible for extending the church whilst he was in the Parish, and for building the Parish Centre. He had an enormous number of friends, and it was with great sadness that Fr Elcock died in a motoring accident in Switzerland on 15th September 1971.

Fr Maurice Abbott was born in July 1917 and trained for the priesthood at the English College in Rome and at Oscott from 1935 to 1942. He was ordained at St Joseph’s in Sale on 17th May 1942. Early appointments were at New Brighton, Oswestry, and Church Stretton before coming to Romiley in 1971. After leaving our Parish he was appointed at Our Lady’s in Birkenhead, and then moved to St Catherine and Martina in Hoylake. He was also resident at St john’s in Timperley and then Whitchurch before retiring in 1988. Whilst serving in the diocese he as also Bishops Secretary from 1957 to 1965 and the editor of the Diocesan Yearbook from 1967 to 1972. He died on 8th July 2004

Fr Louis St John was born in Athlone on 6th June 1926 and was ordained at Kilkenny Cathedral on 3rd June 1951. He was appointed to St Werburgh’s in Chester from 1951 to 1960, and then spent time in Benchill and at St Elizabeth’s in Wythenshawe until 1977. He was then appointed to Our Lady & St Christopher’s where he stayed until 1984. Whilst with us he was made a Canon in 1984. Upon leaving our Parish, he was Parish Priest in Moreton, Ashton on Mersey, Whaley Bridge and Cheadle Heath before retiring on December 1997. Canon St John died 24th October 2004.

Fr Michael English was ordained in Rome in July 1949 and completed studies at the English College in Rome. Fr Michael’s first appointment was at St John & Thomas in Wythenshawe from 1950 to 1960, and then at St Josephs in Stockport until 1961. He was appointed Parish Priest at St Peter’s in Ludlow from 1961 to 1964, and then spent 20 years at St Saviour in Great Sutton where he stayed until 1984. He then came to us at Our Lady & St Christopher’s for a couple of years, before a period of sickness. He then moved to St Laurence’s in Birkenhead until 1988 and finally was at Our Lady of Lourdes in Partington until his retirement in March 1996. He came from a family with nautical traditions and had a great love for the sea. A man of many talents, he had an excellent sense of history, was skilled as a writer and a very good judge of character. Fr Michael died in September 1996. 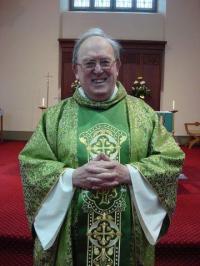 Fr Anthony Cogliolo was ordained on 22nd March 1969 at St Paul’s outside the Walls, Rome after studying for the Priesthood at the Beda College, Rome 1965-1969. He returned to the Diocese of Shrewsbury and served as Assistant Priest in various parishes in Bromborough, Altrincham and New Brighton between 1969 and 1980. He then served as Parish Priest in Tarporley before his appointment at Our Lady & St Christopher’s in 1986. In 1994, after 8 years at Romiley, he moved to Ashton on Mersey, and then onto Weaverham before his appointment to St Teresa’s in Wilmslow. As at September 2020, Fr Cogliolo is still in Wilmslow. 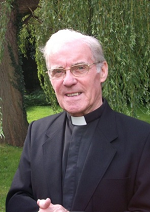 Fr John McLeish was educated at St John’s, Benchill, and St Bede’s College, Manchester, before studying for the priesthood at the English College, Lisbon, from 1953-59 where he was ordained on 31st May 1959 (ironically the same day as Fr James McGrath – our first Assistant Priest!).His first appointment was as assistant priest in St John’s, New Ferry (1959-63), followed by St Michael and All Angels, Birkenhead (1963-66), St Peter’s, Stalybridge (1966-69), and St Anthony’s, Wythenshawe (1969-73).

Fr David Long was ordained at St Alban’s, Liscard on 29th September 1984 – a year when that particular Parish saw 3 ordinations! Since ordination, Fr David was Assistant Priest at Our Lady’s in Stockport and St Teresa’s in Wilmslow.  He arrived in Romiley in September 1999 after spending the previous 5 years as Parish Priest at Holy Family in Pensby.  After leaving our Parish in 2004, he went ‘home’ and back to St Alban’s in Liscard as Parish Priest for the next 13 years.  In November 2017, Fr David was asked to take up a new appointment back at Our Lady’s in Stockport. Fr David then moved to St Vincent’s in Knutsford in September 2020.

Fr John O’Reilly was ordained on 10th July 1976. He was appointed Parish Priest at Our Lady & St Christopher’s in September 2004, moving from Sacred Heart, Wythenshawe where he had been for the previous 9 years. Prior to that appointment, Fr John had been based at St Ambrose in Stockport and St Vincent in Altrincham. After leaving our Parish in 2008, he moved to St Mary’s in Crewe and then to St Catherine & St Martine in Hoylake in 2011. In addition to his Parish appointments, Fr John had many diocesan appointments includ ing : serving in the Tribunal since 1982, first as Defender of the Bond (1982-86) and then as Vice Officialis or Associate Judicial Vicar (1986-2013); Dean of St Bonaventure’s Deanery, Wythenshawe (1995-2004); First Team Leader of the Wythenshawe Catholic Team Ministry (2003-04); Member of the Board of Finance & Planning (1999-2003); Episcopal Vicar for Evangelisation, Christian Unity & Interfaith Dialogue (2000-10); Bishop’s representative on Greater Manchester Churches Together (2000-09) and Chapter Canon (2009-13). Sadly, Fr John passed away in Arrowe Park hospital on 31 st August 2013 .

Fr Philip Egan was ordained to the Priesthood in 4th August 1984 and served as Assistant Priest at St Anthony’s Woodhouse Park (1985-88) before becoming assistant Chaplain at Fisher House to the University of Cambridge (1988-91). He was appointed to St Michael’s, Woodchurch and chaplain to Arrowe Park Hospital, Wirral (1991-94) before doing further studies at Boston College, Massachusettes. For 12 years, he was on the formation staff of St Mary’s College, Oscott, the major seminary in the Archdiocese of Birmingham, where he as the College’s Dean of Studies and Professor of Fundamental Theology. He returned to Boston College as a post-doctoral research fellow of the Lonergan Institute in 2007, before being appointed Parish Priest of Our Lady & St Christopher’s in September 2008. In 2010 he was appointed Vicar General of the Diocese of Shrewsbury, in 2011 a Prelate of Honour to his Holiness Pope Benedict XVI, and in 2012 a Canon of Shrewsbury Cathedral. On 11th July 2012 he was appointed Bishop-elect of Portsmouth, and he was ordained as the 8th Bishop of Portsmouth on 24th September.

Fr. Michael Gannon was appointed to Our Lady & St Christopher’s in September 2012 to replace Bishop-elect Philip Egan. Fr Michael had spent the previous 9 years as part of the Wythenshawe Team Ministry at St Hilda’s and St Aiden’s. Fr Michael was ordained in 1979 and his first appointment was at St Joseph’s, Birkenhead. From there he spent 4 years at St Peter’s in Stalybridge from 1984 to 1988, before becoming Chaplain at Arrowe Park Hospital on the Wirral, while resident at St Michael & All Angel’s, Woodchurch. After that appointment Fr Michael was appointed to Our Lady of Lourdes in Leasowe. During his time as a priest in our Diocese, Fr Michael has also held various other posts including Director of the Catholic Children’s Society and Bishops Secretary. Prior to his 9 years at St Hilda and St Aiden’s, Fr Michael was Parish Priest at another Church in Wythenshawe – St Elizabeth’s in Peel Hall.